WITNESSES OF JESUS OF NAZARETH
Logical Faith and Religion for Salvation

And ye shall be my witnesses both in Jerusalem, and in all Judaea and Samaria, and unto the uttermost part of the earth.  Acts 1:8 ASV
And I saw thrones, and they sat on them. And judgment was given to them, and the souls of the ones having been beheaded because of the witness of Jesus, and because of the Word of God, and who had not worshiped the beast nor its image, and had not received the mark on their forehead and on their hand. And they lived and reigned with Christ a thousand years. Revelation 20:4 KJ3 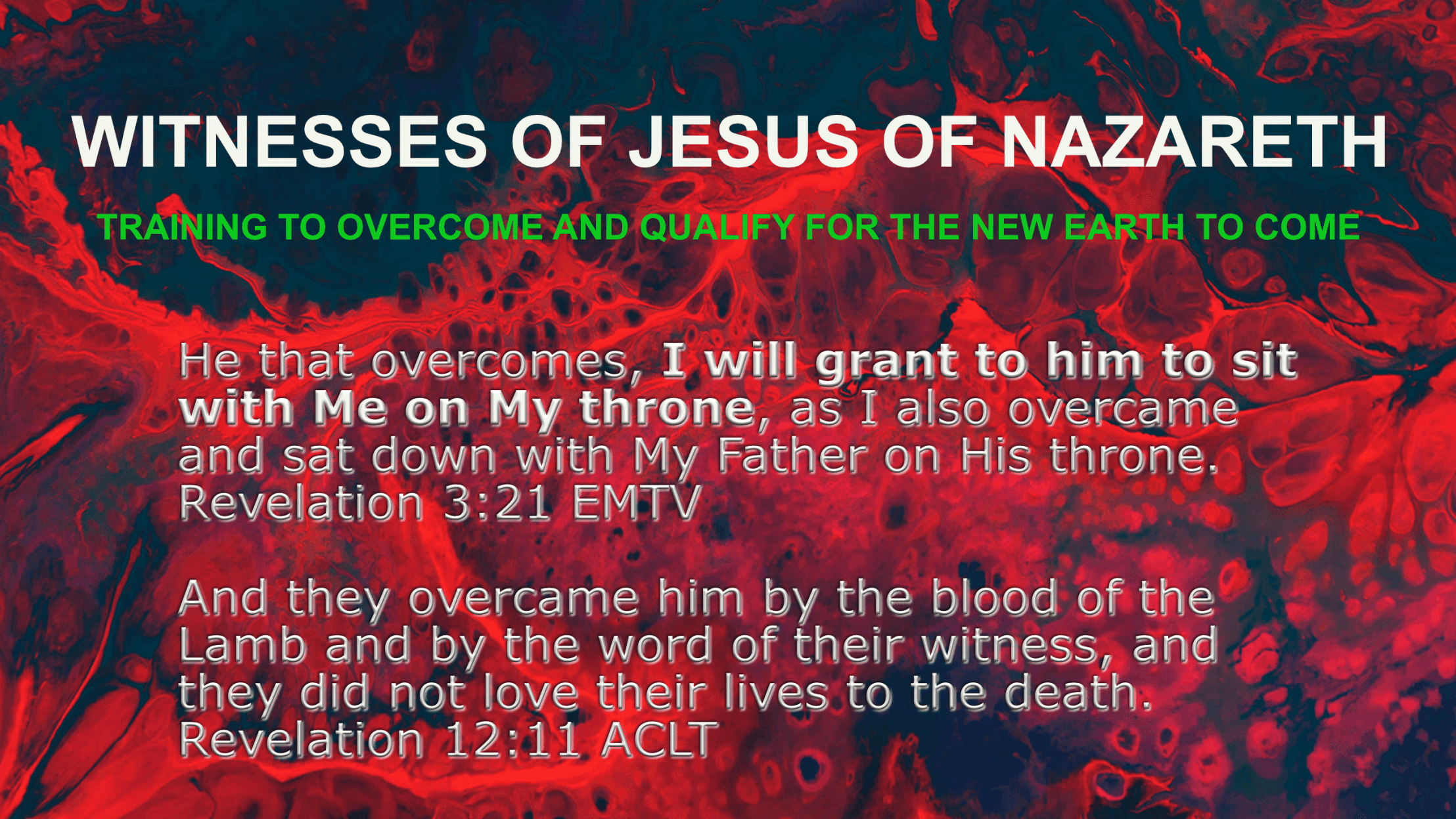 And I saw a new heaven and a new earth; for the first heaven and the first earth had passed away, and the sea exists no more.  Revelation 21:1 Darby
For God so loved the world, that he gave his only-begotten Son, that whosoever believes on him may not perish, but have life eternal.  John 3:16 Darby 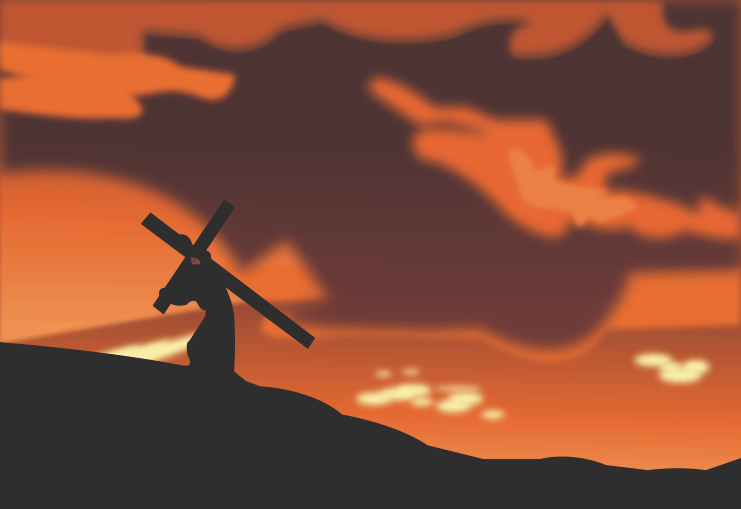 This earth will never be a better place. Behave for the brand-new one to come.

From the perspective of John 3:16 and Revelation 21:1, Jesus is not looking to make this earth a better place. Rather, Jesus is looking to salvage any of the few willing souls who want to escape the destruction of evil and of this blood-stained earth.

The Apostles were charged to teach all nations. Thus, the Apostles were to TRAIN all nations in following Christian Judaism to know Jesus and believe in Him to be saved. The Apostles did not go out of Jerusalem, out of Zion with a different culture other than the one prescribed in Moses and the Prophets which id upheld by Jesus in one of His parables (Luke 16). What is the grade of your Christian education? Is it of man (Mark 7:7) or is it of Jesus (John 3:16)?

WHAT DOES IT TAKE TO BE A WITNESS OF JESUS OF NAZARETH?

To be a witness of Jesus you must be chosen by Jesus to be revealed Jesus, hence, be able to hear His voice and understand His language of parables. Do you know who Jesus is to witness Him? If you know Jesus you can never oppose His commandments or say that He is Archangel Michael.

(13)  Now when Jesus came into the parts of Caesarea Philippi, he asked his disciples, saying, Who do men say that the Son of man is?
(14)  And they said, Some say John the Baptist; some, Elijah; and others, Jeremiah, or one of the prophets.
(15)  He saith unto them, But who say ye that I am?

No one can know on his own who Jesus and His Father is! Potentially, even your spiritual leader or pastor does not know who Jesus is!

(15) He saith unto them, But whom say ye that I am?  (16)  And Simon Peter answered and said, Thou art the Christ, the Son of the living God.  (17)  And Jesus answered and said unto him, Blessed art thou, Simon Barjona: for flesh and blood hath not revealed it unto thee, but my Father which is in heaven. Matthew 16:15-17 KJV

(15) But when it was the good pleasure of God, who separated me, even from my mother's womb, and called me through his grace,  (16)  to reveal his Son in me, that I might preach him among the Gentiles; straightway I conferred not with flesh and blood: Galatians 1:15-16 ASV

Because Jesus ONLY reveals Himself to whomever He chooses no one with a Degree in Theology is automatically chosen by Jesus to graduate with a learned knowledge of Jesus.

All things are delivered unto me of my Father: and no man knoweth the Son, but the Father; neither knoweth any man the Father, save the Son, and he to whomsoever the Son will reveal him.  Matthew 11:27 KJV

And the disciples came, and said unto him, Why speakest thou unto them in parables? Matthew 13:10 KJV
All these things spake Jesus unto the multitude in parables; and without a parable spake he not unto them: Matthew 13:34 KJV

Has Jesus revealed Himself to you so that you can hear His voice in others who belong to His flock, can be His witness, and can know those who speak His language of parables?

And other sheep I have, which are not of this fold: them also I must bring, and they shall hear my voice; and there shall be one fold, and one shepherd.  John 10:16 KJV

But ye shall receive power, when the Holy Spirit is come upon you: and ye shall be my witnesses both in Jerusalem, and in all Judaea and Samaria, and unto the uttermost part of the earth. Acts 1:8 ASV

WE WITNESS THAT TO BE SAVED, WE MUST ALSO WITNESS TO THE TRUTH that:

(46) For if you believed in Moses, you also believed in Me, for that one writes concerning Me. (47) However, if in the writings of that one you do not believe, how  'in the my declarations' will you believe? John 5:46-47 ACLT

A faithful translation of the Greek manuscripts sheds light on many controversial and contentious doctrines on the Divinity of Jesus. John 5:46 is one of the examples. Many if not all translations of John 5:46 make the verse reads as a supposition when it is rather a plain statement, as I have translated it keeping the same past or imperfect tense of the verb 'believed' in the Greek manuscript.

YHWH ELOHIM IS WHO SPOKE WITH MOSES, WHOM HE WRITES ABOUT. JESUS, IN JOHN 5:46, REVEALS HIMSELF TO BE THE TETRAGRAMMATON YHWH ELOHIM OF MOSES OR EL-SHADDAY OF ABRAHAM, ISAAC, JACOB!

"All things were delivered to Me by My Father, and no one knows who the Son is except the Father; and who is the Father, except the Son, and he to whom the Son may desire to reveal Him." Luke 10:22 LITV

Even though Jesus made many declarations confirming that He is YHWH God (John 5:39,46), nevertheless, Jesus says that no one can know Him on their own cognizance (Luke 10:22). 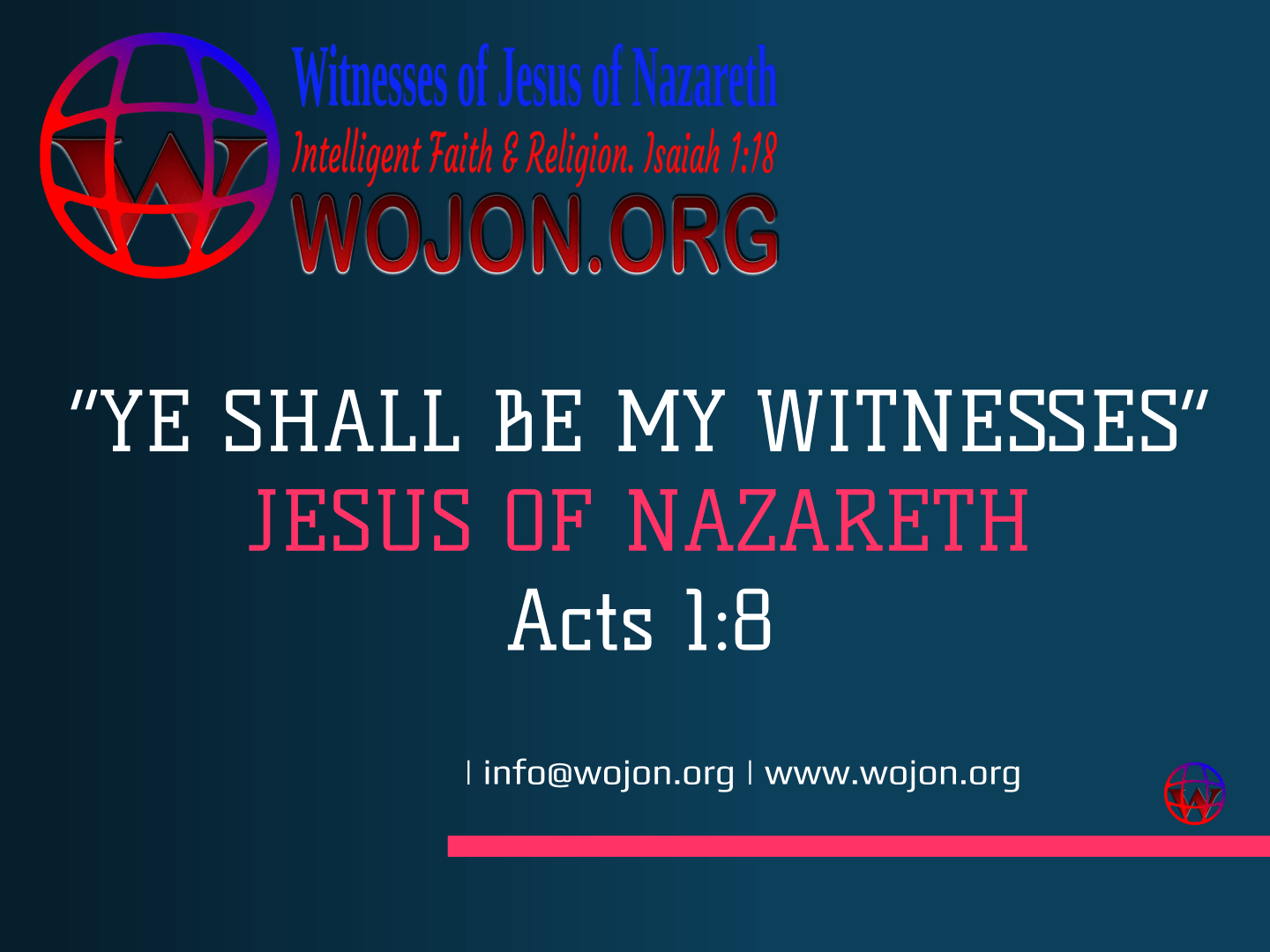 Jesus was killed for blasphemy, hence, Jesus is YHWH

John 10:30-36 KJ3
(30) I and the Father are One! (31) Then again, the Jews took up stones, that they might stone Him. (32) Jesus answered them, I showed you many good works from My Father. On account of which work of them do you stone Me? (33) The Jews answered Him, saying, We do not stone You concerning a good work, but concerning blasphemy; and because You, being a man, make Yourself God. (34) Jesus answered them, Has it not been written in your Law, “I said, you are gods”? Psa. 82:6 (35) If He said those to be gods to whom the Word of God was, and the Scripture cannot be broken, (36) do you say of Him whom the Father sanctified and sent into the world, You blaspheme, because I said, I am Son of God? (65) Then the high priest rent his garments, saying, He hath spoken blasphemy: what further need have we of witnesses? behold, now ye have heard the blasphemy: (66) what think ye? They answered and said, He is worthy of death. Matthew 26:65-66 RV

Witness that Jesus is YHWH God and that He was risen on a Saturday to be saved (Romans 10:9-11)

Many DENY THAT YHOSHUA MESSIAH IS YHWH GOD IN FLESH, and many deny that HE WAS ALSO RISEN (Matthew 28:11-15) and on a Saturday (Matthew 28:1 YLT). Therefore, TO BE SAVED, ALL OF US BELIEVERS MUST CONFESS WITH OUR OWN MOUTH that JESUS IS YHWH GOD and THAT HE RESURRECTED ON A SATURDAY, THE FIRST OF THE SABBATHS (Romans 10:9-11)

(11) Now at their going, lo! some of the detail, coming into the city, report to the chief priests all that is occurring." (12) And being gathered with the elders, besides holding a consultation, they give a considerable sum of silver to the soldiers, (13) saying, "Say that 'His disciples, coming by night, steal him as we are reposing.'" (14) And if ever this should be heard by the governor, we will persuade him, and we will make you to be without worry." (15) Now they, getting the silver pieces, do according as they were taught. And this word is blazed abroad by the Jews unto today." Matthew 28:11-15 CLV


(9) that, if ever you should be avowing with your mouth the declaration that Jesus is Lord [Lord is Greek for YHWH in Hebrew], and should be believing in your heart that God rouses Him from among the dead, you shall be saved." Romans 10:9 CLV

The Main Foundation of the WOJON Flock is to witness that Jesus is YHWH God in the flesh, that He was indeed risen on a Saturday, that Moses and the Prophets, in matters of Faith and Behavior, are still immutable but that all the feasts in Moses are no longer binding per Colossians 2:16-23. 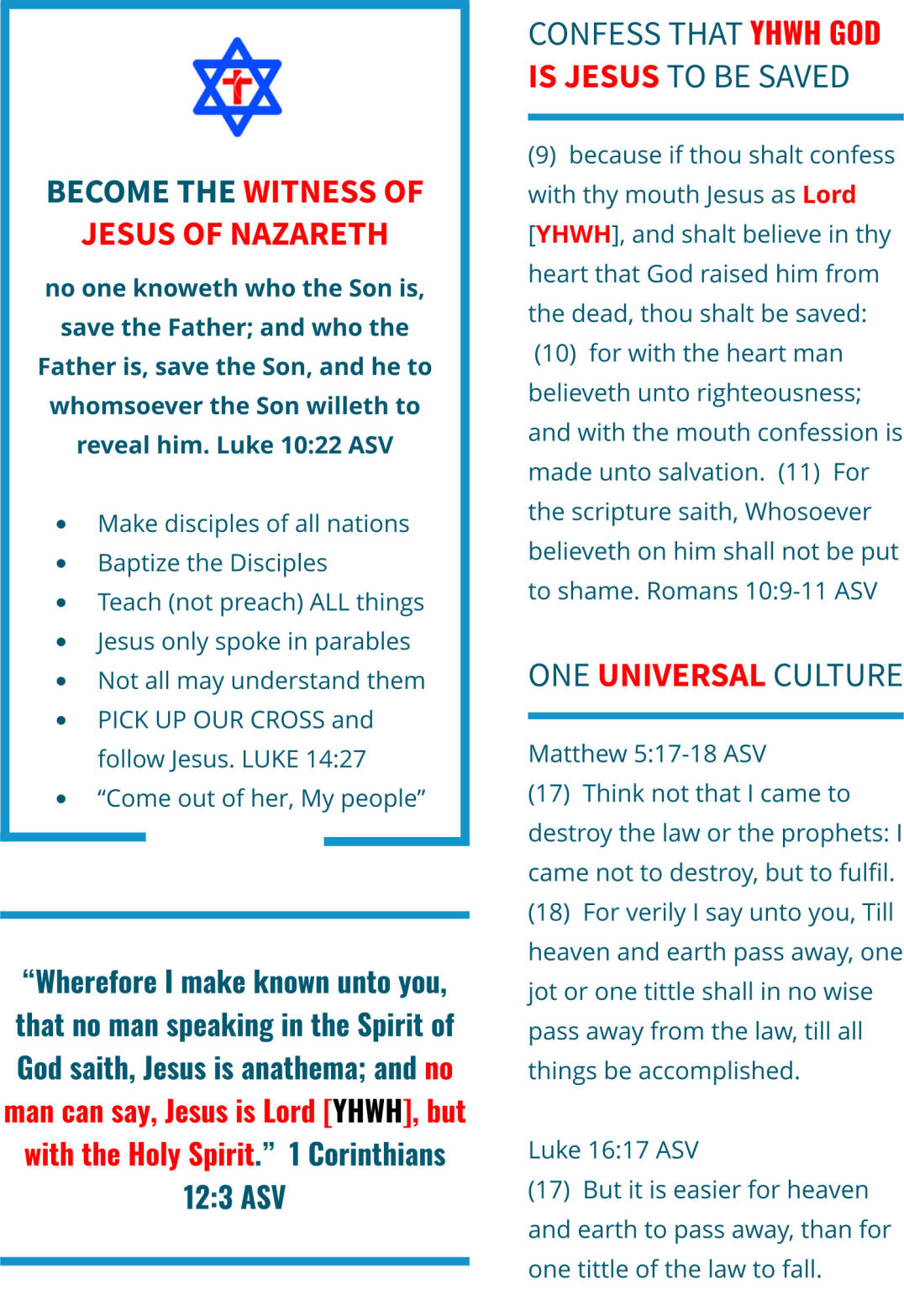 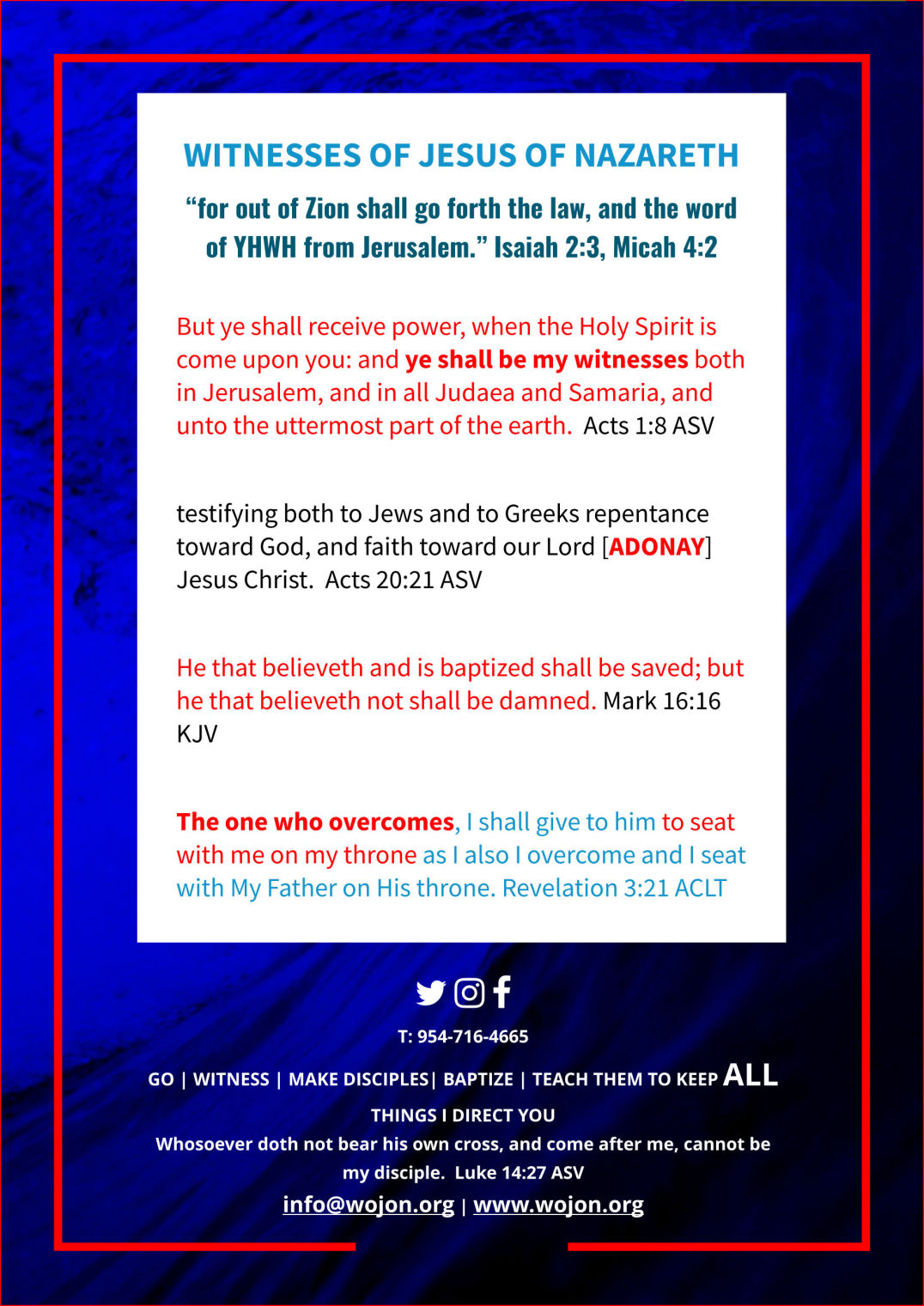 Set thy heart to understand. And understand with your heart.

Then said he unto me, Fear not, Daniel; for from the first day that thou didst set thy heart to understand, and to humble thyself before thy God, thy words were heard: and I am come for thy words' sake.

(10) for with the heart man believeth unto righteousness; and with the mouth confession is made unto salvation. For the scripture saith, Whosoever believeth on him shall not be put to shame. 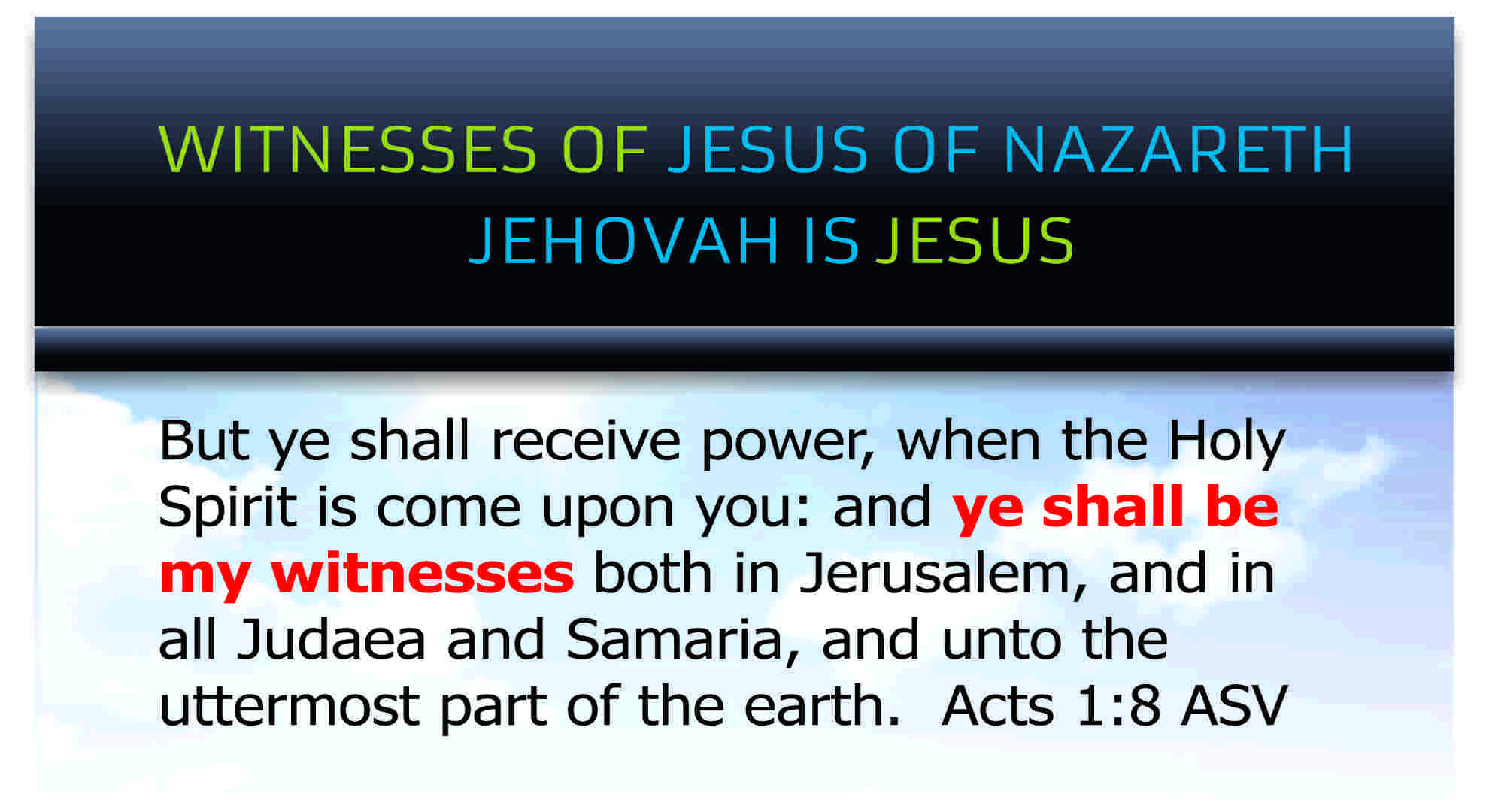 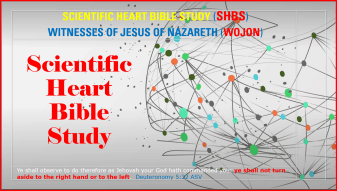